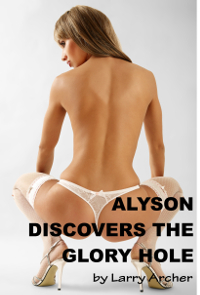 Alyson Discovers the Glory Hole (30,000 Words) is on sale now through the middle of next week 2-November-2016 for 99 cents, regularly $2.99. This story is currently the only one I have that is in Amazon’s Adult Dungeon, assuming I can get The Watchers paroled.

This sale is an experiment on trying to determine the effect of having a story ranked “Adult” does for sales. About the only way you can find the story on Amazon is to actually know the title as being ranked Adult removes the story from the search engine.

While in the toy section, they pick up a straight couple when the wife becomes infatuated with Foxy’s braless jugs, micro-mini, and thigh high boots. Foxy makes Alyson take care of the husband to help get her warmed up. Foxy’s dominate side quickly comes out as she punishes the cashier for hitting on her husband and gives her ten lashes with her riding crop in front of the other customers as correction. The young Goth cashier begs Foxy to become her Mistress and take her as a new slave.

In the booth, Alyson stays on her knees, taking care of every guy who pokes his rod through the hole in the wall and is quickly covered from her face to her chest with one facial after another. The other girls take turns helping Alyson service the anonymous appendages that are poked through the wall.