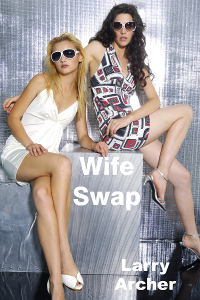 Wife Swap ( 26,300 words) In a plot similar to their 1969 movie namesake, two couples Bob & Carol and Ted & Alice decide to open up their marriage and share some of their most intimate fantasies. Follow along as the two wives decide to swap husbands for an innocent date but things rapidly spiral out of control, when they realize that Carol has a multiple personality Sybil, who is up for anything and anyone.

You may have to put your Kindle in the freezer to cool it off after reading this graphic novel about swingers and the swinging lifestyle.

After finalizing the details, the girls got dressed and went home to their respective husbands. Carol fixed her husband Bob a drink and had it waiting for him when he got home. After a kiss hello, Carol said, “Sit down Bob. I want to talk to you about something.”

Taking his drink, Bob sat down on the sofa, while worrying if he was in trouble or something. “Is everything all right?” he asked Carol.

“Better than alright, it’s great!” Carol gushed as she sat down on Bob’s lap and put her arms around his neck. As she snuggled up to him and kissed his cheek, she said, “You know how you’re always telling me that you like girls with big boobs?”

“Sure, have you decided to get a boob job? That would be pretty neat,” Bob replied.

“Not quite Bob but I think you’ll like this idea even better.”

“I don’t understand, what are you talking about?” Bob questioned.

“You know how we go out on date nights, every other Saturday?”

“How would you like to be fixed up with one of my girlfriends, who has a rack to die for?

You can take her out to dinner and dancing.” Carol proposed.

“What’s the catch? Why are you letting me go out on a date? Is she some kind of dog or something?” Bob wondered.

“No baby, she’s beautiful and is everything you’ve dreamed about. She has a buxom build, long blonde hair, and big, and I mean big tits.”

“But I love you sweetie and love the way you look. I’m not interested in someone else,” Bob replied, as he wasn’t sure where this was going and didn’t want to say the wrong thing.

“Silly, I know you love me but wouldn’t it be fun to go out on a date with a hot chick and spend the evening alone with her?” Carol asked with a shit-eating grin on her face.

“Well, that sounds pretty good but what are you going to be doing?” Bob wondered.

“Well since you asked, I’m going to be out on a date with her husband,” Carol replied.

“Wait a minute, I’m not sure I want you out with some guy,” Bob protested as he tried to figure out the angles here.

“It’s just dinner and dancing. All innocent fun,” Carol replied as she kissed him on the ear and stuck her tongue in his ear.

“Well, I guess that would be okay, and it would be fun to be out on a blind date,” Bob finally admitted.

“See, I told you it will be fun, and I know you’re going to love her except not in a romantic way.”

Bob mulled this around in his mind and realizing that this other guy was probably going to be hitting on his wife. But on the other hand, he might get to feel up some big jugs. Finally, Bob asked, “What are the rules?”

“Best you can do is second base,” Carol answered as she walked to the bar to refill their drinks.

“Second base,” Bob said to himself. “That means I might get to play with her big tits?”

Handing his refilled glass back to Bob, Carol said, “Just so you understand, second base is not guaranteed but is the limit?”

“So if we do this, her husband can get to second base also?”

Then Carol added, “How about I show you what your date looks like?”

“That would be good,” Bob replied as this was starting to sound pretty good except for the part about her husband playing with his wife’s tits.

Just then Bob heard his phone bing that he’d received a text message. Carol told him, “Check your phone, I sent you a picture I shot today at the gym of Alice.”

Trying not to run and appear over anxious, Bob quickly walked over to his jacket pocket and retrieved his cell phone. Opening up his message app, there was a picture message from his wife. With shaking hands, Bob opened the message and almost dropped the phone on the floor from the shock of seeing his wife and another woman in only panties standing there.

“We took selfies so that you guys would know what you’re getting,” Carol told him with a giggle.

“Fuck,” Bob said to himself as he used the zoom feature to blow up the picture. He could feel his dick getting hard as he looked at Alice’s big jugs while standing there in a skimpy pair of panties that showed almost everything. Alice was knock down gorgeous with a hot curvy body but those tits, unbelievable.

“So Ted sees the same picture?” Bob asked. “Ted is looking at your tits right now?”

“Yep, except from Alice’s phone. She’s pretty hot don’t you think? Did you notice how we’ve got our arms around each other and you can’t imagine how good her body feels?” Carol said.

Bob stared at the picture and true their arms were around each other’s waist and they were turned towards each other with their breasts touching. Bob thanked the gods for a 16mb camera on Carol’s phone as he zoomed in as close as he could. All the way in, he could see their nipples touching and he could feel his dick throbbing.

“Aren’t you going to ask me something?” Carol prompted.

“Don’t you want to know what her tits feel like?” Carol asked as she grinned at him. Then looking down at the bulge in his pants, she said, “You like what you see don’t you? Well, that could all be yours, within limits.”

Carol’s pussy had been burning up all afternoon and talking to her husband about Alice only made the flame burn hotter. Reaching down, she ran her fingers down his bulge and then raked up with her fingernails, which made Bob gasp.

“Carol, is this all some sick joke to get me to admit that I’d like to fuck your girlfriend?”

“What, do you think I’m just trying to make you jealous and have you admit that you’d like to get into her pants? I can’t blame you for wanting to get in her pants, I’ve been in her pants and trust me it’s as good as it looks. I can see now why you like a girl with big jugs; they are so much fun to play with.”

Carol could see the sweat breaking out on Bob’s forehead as he struggled to figure out what was going on. It was so much fun to tease him and she was going to make him pay to play.

“Well big boy, the rules are currently that you can’t have anything below the waist without my permission. So let me ask you punk, do you feel lucky?”

“Please Carol,” Bob pleaded, “I don’t understand any of this but just want you to know that I really love you and would never do anything to hurt you.”

Taking her fingers, Carol started stroking Bob’s stiff cock through his slacks. “Well, I’m not sure if I believe you because while you’re telling me all that, your dick is as hard as a rock and I don’t think it’s all because of me.”