House Party is Burning Up the House! 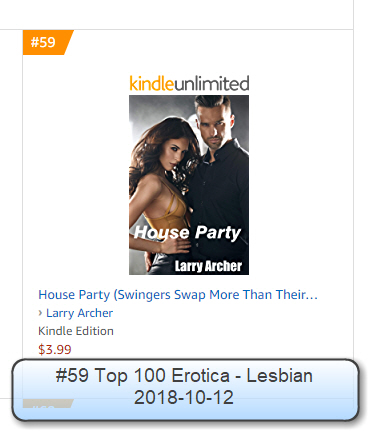 Thanks, Guys for your support of my latest dirty novel, House Party. It’s been out less than a week and has sat in the top 100 Erotica stories in the Lesbian, Bisexual, and Gay categories all week.

House Party is currently #59 in the top 100 list of Erotica – Lesbian and has almost 7,000 page reads in 6-days! It is ranked similarly in the Bisexual and Gay categories.

The sales rank at Amazon has fluctuated between 30,000 to 50,000 all week, which may not sound that great but for an erotica story, cracking 100,000 is super and half that is even superer! Or “more better” as we would say down home!

For those who’ve read some (all) of my Foxy and Larry swinger’s stories, House Party is number eighteen in the series. The stories are somewhat of an autobiographical look at our personal journey through the Lifestyle. We’ve been swingers for a while, and it’s been a fun adventure 99.9% of the time.

But, never fear as the story does not involve any fighting and not much angst to speak of.

The thumbnail sketch is when Foxy and Larry along with their girlfriend Chrissy attend a swinger’s house party. They meet a sophisticated and beautiful couple from LA and Foxy falls for the husband, rather than the wife as usual.

She leaves Larry and runs off with Russell to California. They leave Russ’ wife Delphine in Larry’s capable hands and disappear into the sunset.

Larry in the meantime tries to move on without his wife of many years and takes up with a television news reporter in addition to Chrissy and Delphine. At this point, the story devolves into two tracks, one with Foxy and her newfound sexual freedom and Larry at home running the strip club, while trying to find love in all the wrong places.

House Party is available for purchase on Amazon Kindle or if you are a Kindle Unlimited member, you can read it for free on your electronic device. For those who do not have a Kindle, apps are available for your PC, Mac, tablet, or phone.

If your normal Amazon homepage is not listed above, just search for House Party’s ASIN number B07J3C4PXB and you should find it.

After you read House Party, please take a minute and leave a review. Indie authors do not have massive publicity machines and rely on our readers to get the word out. Even a few words help and encourage writers, like me, to keep the smut pouring out of their keyboard.

Note: The following excerpt is taken from the first time Foxy and Larry had met and bedded Russell and Delphine at a house party.

Pulling her mouth off Larry’s dick for a minute to breathe, Del watched as Chrissy easily took Larry to the root in one motion. She was amazed that the redhead could deep throat that large cock without any effort at all.

She watched Chrissy’s face, and her half-open eyes were completely white. Can she really climax while sucking dick? But watching the spasm which ran through the girl’s body, followed by how she relaxed against Larry, indicated that she had in fact come.

“Did you just come?” Del asked Chrissy as Larry’s cock slipped out of her mouth. She had a lazy smile on her face as her eyes opened, “One of the side benefits of living with Foxy and Larry.”

“Can you teach me that trick?” Delphine asked in a serious tone.

“Sure, it’ll be fun,” Chrissy answered with a giggle. “Now don’t you think it’s time for you to get fucked?”

“What about my husband?”

“Larry’s not into guys, but after he’s finished with you, we’ll see!” Chrissy said laughing.

“No, what I mean is that Russ has never seen a guy in me before. We’ve always partied in different rooms, not that we’ve done it very many times before. We’re still new to the swing scene.”

“Foxy’s got her legs wrapped around his neck, and I guarantee that he’s not worried about you in the least!” Chrissy said as she looked over to watch as Russ drilled deep into her bald pussy.

Del listened for a second to the sound of flesh slapping against flesh as her husband fucked Larry’s wife. She could hear Foxy telling her husband what a nice long dick he had and how good it felt in her dirty cunt.

Cunt, there was that word again, and somehow it seemed more appropriate than ever, she reminded herself as she heard her husband grunt every time he slammed his cock into Foxy’s juicy hole.

Larry picked Delphine up off the floor and laid her on the bed next to his wife. Spreading her legs, he worked the head of his cock up and down between Del’s wet lips. As his dick slowly entered her wet box, she felt Foxy patting around on the bed until she found Del’s hand. Wrapping her fingers in Del’s, she squeezed her hand tightly as Russell continued to pound his big cock into her cunt.

Turning her head to look at Foxy, she could see that she was in mid-climax, and it was almost creepy to watch her eyes slowly roll up in her head until all she could see was white. Foxy was making kissing motions with her lips, and it took Del a second to realize that she wanted to kiss her.

Larry’s cock was stretching her open as she leaned over to kiss the brunette being fucked by her husband. My second girl kiss, she told herself as Foxy’s tongue speared deep into her mouth. As their lips mashed together, she felt a shudder run through Foxy’s body as her climax exploded.

It felt like a burning rod being shoved in Del’s hole as Larry buried his dick in her pussy. Russell had never felt like this before, and she could feel the head of his tool pushing against her cervix, demanding entrance.

“Unbelievable,” is all she could say without really pissing off her husband. For two guys with large cocks, Larry seemed to go deeper and different places than her husband ever had.

Chrissy kept whispering sweet nothings into her ear. Encouraging her to focus on her cunt and ignore everything around her. Chrissy’s fingers were stroking Del’s clit and adding to the torment as her next climax built rapidly. She could feel her legs starting to tremble and jerk as Larry pounded his cock into her tight hole.

“Just let it go and let me see how hard you can come,” Chrissy ordered as she kissed Del and tweaked her nipples.

Delphine could feel her mind starting to soar as the volcano erupted between her legs and she could feel that all her self-control was spinning away. Her climax hit like a runaway train, and Del screamed as she poured every bit of her body into a climax that she’d never experienced before. She grabbed the sheet with both hands and arched up off the bed to meet Larry’s thrusts. Chrissy pinched her nipples hard and the pain added to the strength of the climax that she would always remember.

As her climax slammed into her, she could hear Larry grunting, and the feel of his white hot seed pouring into her greedy hole was the icing on the cake. When opened her eyes, she found Foxy above her. “He’s a good fuck, isn’t he?” the big-haired brunette asked as she kissed Del. “I can still taste his pre-cum on your lips.”

She tried not to be self-conscious as she realized that she’d just been fucked by another woman’s husband as she watched. But still, it was so fucking good that it was easy to overlook that little fact.

Smiling up at Foxy, she reached up and pulled her down for another kiss. After a long tongue filled kiss, she asked, “Was Russell okay?”

Giggling, Foxy replied, “One of the best fucks I’ve ever had. Your husband has a talented dick.” Then pulling her close, she whispered into Delphine’s ear, “Don’t worry, I like it when Larry gets well fucked, and we both like to watch.”

“Foxy, my husband has never watched me have sex before, and you’re sure he didn’t mind watching Larry and me together?”

“So you always did it in different rooms?”

“We’ve only swung a couple of times, and it was never like this,” Delphine admitted.

“Have you ever been with a girl?” Foxy asked as she felt Del’s boob and played with it.

“No, but this has really been nice especially with Chrissy playing with me.”

Foxy kissed her again as her hand trailed down the center of her chest until she was stroking Delphine’s well-fucked pussy. “Larry came in you didn’t he?”

“No, it’s just unusual as most girls have a hard time getting Larry off and what you did in thirty minutes takes most girls several hours.”

“He can fuck for hours? That’s unreal!”

“Oh, Foxy,” Delphine moaned. “That’s feels so good. My pussy is so sensitive after having Larry’s big dick in me.”

“Del, I want you to take good care of my husband because I plan on fucking yours until his dick is a limp noodle. Then I plan on sucking his cock nice and clean.”

This is perfect, she obeys every one of my commands without question! Foxy thought as Del breathed in the aroma of her well-used hole. She could see the girl’s eyes dilate and lose focus as her fingers went into Del’s mouth. “Suck my fingers clean and think about where they’ve been.”

“Did you just come?” Delphine asked, but it was a stupid question as the vacant look on Foxy’s face told her the answer. “How can you come from just kissing?”

A lazy grin crossed Foxy’s face as they slowly focused on Delphine, “I can come by just thinking about it. Larry can teach you that just like he taught me.”

Okay, pull your hand out of your pants and grab your keyboard to get a copy of this 85,000-word story or read it for free with a Kindle Unlimited subscription!

2 Responses to House Party is Burning Up the House!