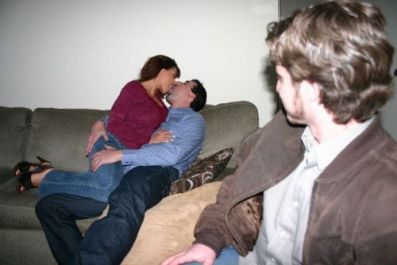 Jack Ryan, the new television series on Amazon Prime is pretty good if you like Tom Clancy type stories. For those born under a rock, Tom Clancy burst on the military adventure scene a few years ago with The Hunt for Red October. Then pretty much at the peak of his career, he had a heart attack and lost his final battle with the big guy upstairs.

Jack Ryan is a recurring character in several of his books as a CIA analyst slash historian turned spy and killer of evildoers. Amazon Prime has developed a series starring Jack Ryan as you guessed it, a CIA analyst.

The drone pilot, whose conscience is bothering him about killing people in the desert ends up going to a casino on Fremont Street (downtown Las Vegas). I don’t think we learned the name of the casino, but that’s not important.

Now he’s sitting on the couch with his pants down when Wifey gets up and gets dressed. So I guess it wasn’t that great since she didn’t try for sloppy seconds.

So let that be a lesson to all of you would be Bulls out there, be sure hubby just wants to watch and not whip your ass!

House Party was supposed to be 25-30,000 words, but no, they don’t pay any attention to me and just keep fucking and sucking, as we say in swinging. The Cliff Notes version is about our perennial swingers, Foxy and Larry, who go to a house party to help break in a new couple.

Now, she’s happy getting her lights drilled out on a regular basis by two guys who have to tuck their dicks into their socks. She also has a female love interest who helps with the chores.

Larry meanwhile is wondering what the hell is going on but is soldiering on as he tends to his duties taking care of his stable. I haven’t written the final chapter, but at this point, the story will end up bleeding into a book #2 because so far Foxy hasn’t come home.

Foxy’s left her husband in the care of a young blonde television reporter, who is busily working her way in the door. I don’t know how this is going to end, but I think everyone should be happy. So for now, the story is still ranked HEA, but even if Foxy doesn’t come home, there won’t be any crying over spilled milk.

For more on House Party, click this link and watch for it coming out soon!

For more on Larry Archer’s line of explicit erotica and sex stories for men and women, click this link.