On Sale For A Limited Time

This is the story about Don, an ordinary guy who is down on his luck. In fact, while he was down, Lady Luck even gave him a couple of hard shots to the stomach.

Dumped by his wife and fired from his job, Don is befriended by a stripper and the club owner, who feel sorry for him. The strip club builds a truck with a clear plastic box on the back, complete with a stripper pole.

This story was inspired by the actual stripper mobile, which had a clear plastic box on back and featured strippers dancing as they drove up and down the Las Vegas Strip. The real stripper mobile only lasted a few weeks until our more uptight citizens raised such a ruckus that it was retired but lives on in my story.

Available at all of the usual pervert distributors such as: 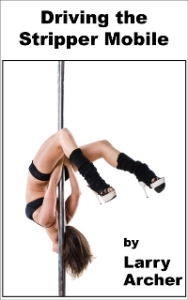 Alternate cover for Amazon as they thought the original cover was too explicit. Same dirty story, just a different cover image.