My Wife and I Have The Same Taste In Women 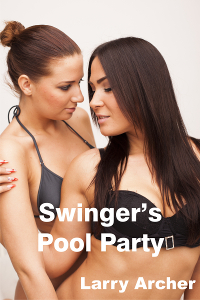 This post is a month or two late, sorry about that. I was writing it and got off on something else and just discovered it in my drafts. The post follows below and resulted in my story, Swingers Pool Party, which is available at Amazon Kindle by clicking this link.

I’ve just finished a couple of half-assed sexting messages to one of my favorite bloggers Ann St Vincent and it got me to thinking about the fact that my wife and I have the same taste in women. If we’re at a party and I’m hitting on some sweet thing, I have about a 50-50 chance of my wife taking her away from me. But at least she usually lets me watch. 🙂

While a good looking girl stands out, that’s not what we look for. There’s a certain quality about some women that just makes them fun to be with. You look at a girl and say to yourself, “I bet she’s really nasty!”

There is just something about some girls that you know are going to be a handful in the sack and often you wonder if you will make it out alive with all of your appendages intact. When you tell someone, “Good girl!” those two words mean more than you can cram into two pages of text.

In the Lifestyle, we’ve met a broad selection of couples and a few unicorns, who span the bracket between one extreme to another in all things especially sexual. One girl we know looks just like a librarian complete with the horn rimmed glasses. You’d think she is so tight assed that a pencil wouldn’t fit yet with her ear plugs are mandatory as she screams half the time. I always worry that one night, SWAT is going to break down the door thinking that a human sacrifice is going on!

For a guy, it is the proverbial kid in a candy store when you go to a swinger’s party. Most of the people are there to get laid and if not to enjoy the show. The biggest surprise to me was women hitting on you as I had only seen that in a couple of instances in my straight life. Sure girls would flirt with you and let you know they were interested but at a house party, you get asked straight up.

Luckily my wife had a handful of the girl’s hair to make sure she did a good job and talked dirty into my ear to get my mind off the fact that I was getting sucked off in a room full of several hundred people.

That was my moment of being thrown into the deep end of the pool without a life jacket. Luckily everything came out alright, pun intended.

But what we found was that we had fun and enjoyed being with almost everyone that we’ve met in the Lifestyle. Certainly there are always a few assholes, typically guys who are new and will get weeded out pretty quickly.

We met a new couple at one of our best friend’s house a couple of weeks ago. I started writing a post of our fun at the pool party but as most everything I do it rapidly approached manuscript size and I’ve now decided to post it as one of my eBooks. With the names changed to protect the guilty, naturally.

You can always tell them by the way they hide in the corner, terrified for their lives. I think swingers tend to forget that they were once new and if the couple doesn’t try, no one will talk to them.

We always talk to new couples even if we’re not attracted to them and see if we can introduce them to others that they might get along with.

Talking to the new couple, we find that they are interested in swinging but don’t have a clue beyond where’s the bowl you throw your keys in. The couple that invited them was not high on our list and it was about par for them to throw these two to the wolves, without a second thought.

The whole time, our new couple are sitting there with their mouths hanging open. I’m looking at the girl and while I can see it’s a shock, there is also interest in her eyes. Could be possibilities here, I thought to myself.

We talk to her and assure her that like a wayward dog, her husband will come back home wagging his tail behind him, sooner or later. I don’t know if it’s intentional or not but my wife keeps rubbing her erect nipple on the girl’s arm.

The girl finally decided that her husband can take care of himself and grabs another frozen Margareta from the pitcher. Wifey looks at me with that what’d you think look and I nod my head. After a couple of more minutes of idle chatter, we invite her to the casita behind the pool.

We lead the girl to the bed and I let wifey take the lead as in many cases, they are more comfortable getting started with another woman because it is less likely to evoke jealously.

They seemed to hit it off and I was surprised at how quick, she came over to the dark side. Wifey can be pretty aggressive if she is attracted to the woman and climbs on top of her, while they kiss and make out.

Pretty soon wifey has her in a lip lock and two fingers buried in her, while she looks for the g-spot. For some reason, it really turns me own to watch Foxy’s arm muscles when she fingers a girl. I love to see her muscles tense up when she tries to get in as deep as she can. You can tell she’s trying to get deep, with her long fingers.

As I spread her legs apart to sample her wares, Foxy looks at me and smiles, while she pulls her dripping wet fingers out of the girl and paints the girl’s lips with her juice.

I can hear my wife moan, as she kisses the girl and tastes the pussy on her lips. She pushes her fingers between their mouths as they share the rest of the juice on her fingers. This girl is really amazing and unbelievably primed for action. It’s something you seldom see in a new couple.

By this time, I’ve spread her lips and am using my tongue to clean her up. This girl is dripping wet and starts humping my mouth as I run my tongue up and down her slit, while I tease her clit with a finger that I’ve just pulled out of her wet hole.

My wife leans down and kisses me, while sucking my tongue and lips clean. I can feel my wife get her rocks off when she tastes the pussy in my mouth. My wife can come just by thinking about it and once her fuse is lit, is a regular come machine until she gets exhausted from climaxing over and over.

I then took turns banging the two girls until I wore both down. Wifey was pretty much out of it and falling asleep on us. Our host came by to watch for awhile and said his wife and the girl’s husband had passed out but gave a good accounting of himself.

We ended up taking the wife home with us and entertained her for the weekend, while her husband tried his best to satisfy the hotwife. If you’re interested grab a copy of the story to see all the details.