Almost All of My Books Out of Amazon Purgatory

I received my rejection letter last night and Amazon thinks one of my stories is a little too nasty and has received the dreaded “Adult” classification.

Now normally you’d think being classified as “Adult” would be a good thing for erotica but not at Amazon Kindle.

The book is still there and available for purchase but is excluded from most searches and you pretty much have to know it exists and ask for it by name. It is the proverbial magazine that they keep under the counter in a brown wrapper.

I’ve had several books classified as “Adult” instead of “Safe” and have been successful in getting them off the banned book list except for Alyson Discovers The Glory Hole, which I guess just pushes the line a little too much.

I even tried changing the cover picture to this one but no, no, no. The 800# gorilla in the room was not a happy camper. 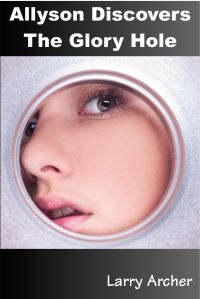 While in the toy section, they pick up a straight couple when the wife becomes infatuated with Foxy’s braless jugs, micro-mini, and thigh high boots. Foxy makes Alyson take care of the husband to help get her warmed up. Foxy’s dominate side quickly comes out as she punishes the cashier for hitting on her husband and gives her ten lashes with her riding crop in front of the other customers as correction. The young Goth cashier begs Foxy to become her Mistress and take her as a new slave.

In the booth, Alyson stays on her knees, taking care of every guy who pokes his rod through the hole in the wall and is quickly covered from her face to her chest with one facial after another. The other girls take turns helping Alyson service the anonymous appendages that are poked through the wall.

Finding Freedom and Clarity Through Creativity